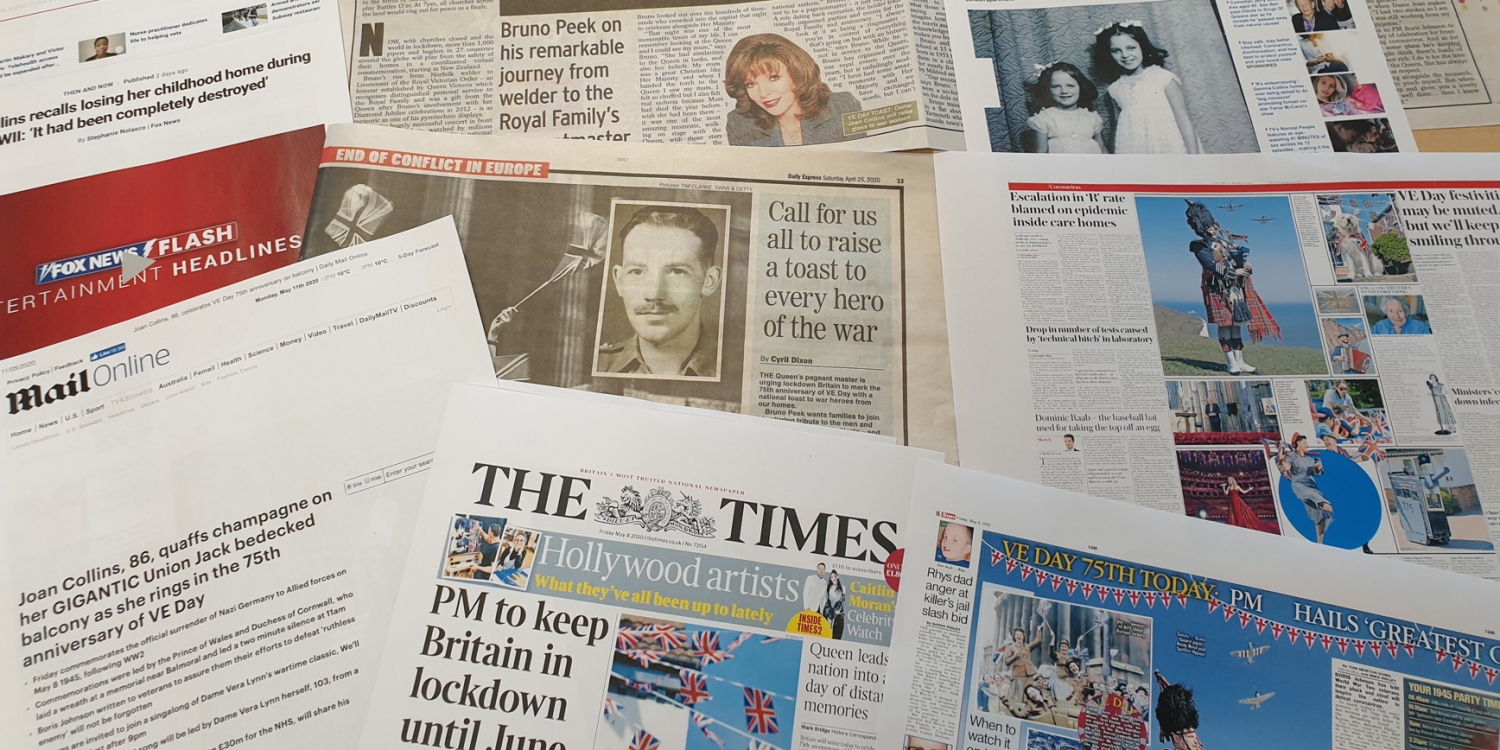 At TMS Media, telling and sharing stories is what we do. Whether it is a press release, a piece of design or print, a media campaign or a website, just ask us and we can deliver. One great example was the support for Great Yarmouth’s Bruno Peek and his bid to mark the 75th Anniversary of VE Day.

This was set to be a huge national initiative with events all over the globe harnessing the great pride we all have in remembering those who sacrificed so much during World War Two.

Then the Covid-19 outbreak began, and Bruno had to swiftly re-think what he was doing. A patriot and someone who relishes a logistical challenge, he looked at what could still happen within the Government guidelines so everyone could still mark this milestone.

So The Nation’s Toast went ahead as we were all encouraged to raise a glass in memory of those who gave up so much, pipers worldwide joined together at 3pm to mark the moment, and the country’s licensees were asked to get involved and raise a glass too to recognise the importance of pubs at the heart of our community for 75 years.

TMS Media has supported Bruno right through this process across our departments. Our designers worked with him on imagery to capture the essence of this important day which would be used across the campaign.

Meanwhile our web team developed a portal which could give everyone the information they needed to support the day while also allowing those who were going to become official participants the opportunity to register.

Bruno is very well-known for the many events he has organised including a network of beacons to commemorate previous VE Day anniversaries and for the Queen’s 90th birthday, and a dinner in London for veterans of the Falklands War.

He already enjoyed a strong media profile, but The Nation’s Toast enjoyed an increased media spotlight when the film and TV icon Dame Joan Collins came on board as the official supporter on behalf of the women of the nation.

Having been a child during the War experiencing both evacuation and the bombing of London, she could share her memories with great clarity and poignancy, and that increased the media interest.

Our PR team worked in conjunction with Bruno to co-ordinate media requests from all over the globe and resulting in coverage on Lorraine on ITV, the Jeremy Vine Show on BBC Radio 2, across the BBC Local Radio network, The Daily Mail, The Mail On Sunday, The Sun, The Times, Metro, Fox News, and TV in France, Germany and Australia.

We were also conscious to ensure we did not forget the media on home ground too ensuring coverage in the EDP, Great Yarmouth Mercury, BBC Radio Norfolk, and ITV Anglia News.

And we worked with a long-term contact at the British Beer and Pub Association who found case studies and landlords/landladies happy to participate and talk to the media.

It was not without its challenges juggling interviews and the VE Day 75 website was also put under pressure with around 840 people a minute logging on to it at its peak.

But we worked nimbly to find a fast solution which meant people could still access it worldwide and ensure they got all the information they need.

A true TMS Media team effort to help spread the word and ensure the nation could mark a truly historic day.